A Florida Man has been arrested for striking his daughter in the face with a slice of pizza. According to police who responded to a disturbance call at the victim’s home in Vero Beach, the 20-year-old female had “what looked to be tomato sauce on the left side of her face.”

Upon further inspection police found the floor inside the resident’s front door to be “covered with pizza toppings.”

The victim told police that her father, Tyler Worden, 41, came to her home Sunday afternoon to drop pizza off. But when she told Worden that she was not feeling well and asked him to leave, he began arguing with her.

When the woman sought to close the front door, Worden allegedly threw a pizza slice at his daughter, striking her in the face.

After the woman dialed 911, cops arrived at the residence and questioned Worden, who admitted throwing the pizza, but claimed he thought the door was shut at the time. An officer noted that he detected a strong odor of an alcoholic beverage on Worden’s breath. 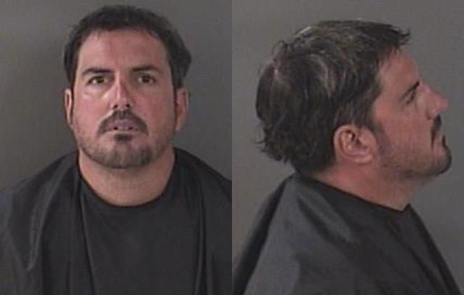 Pictured above, Worden was arrested for battery and booked into the Indian River County jail on the misdemeanor charge. He was released from custody this afternoon upon posting $500 bond, and has been ordered by a judge to have no contact with his daughter.

Worden, who was working as a chef, is scheduled to be arraigned on June 15.

New York Yankees Too Bored To Watch Their Own Team

Mother Arrested After Police Discover Her Dark Secret In The Freezer