It has been reported that a transgender political candidate confronted the owner of a Star Wars memorabilia store in Washington state and that the owner was caught on video having a shouting match with him over a sign in his window that read, “If you are born with a d–k you are not a chick,” according to the report.

According to King 5 TV, Tiesa Meskis, a councilwoman from the town of Aberdeen, stormed into the Sucher & Sons Star Wars Shop on Wednesday and confronted owner Don Sucher about a handwritten message that he had posted on Facebook, according to the station.

“Trans women are women,” as she comes face to face with Sucher in the video, Meskis can be heard yelling at the store owner.

His window sign said: “Just out. Dr. Seuss’s new book. ‘If you are born with a d**k, you are NOT a chick’. Period. This new release is out now because cancel culture banned his early books.” 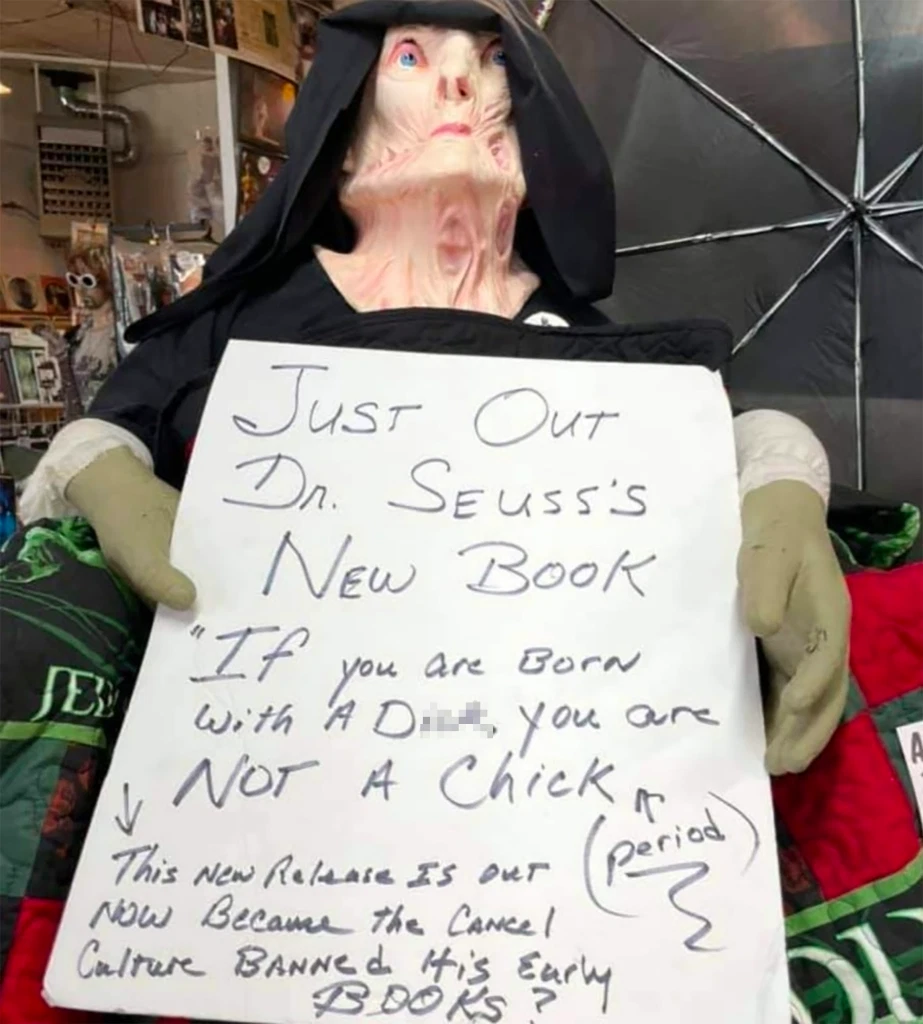 When Meskis accused the shop owner of lying, Sucher responded, “No, what you’re spouting is bulls–t.”

“No, it’s not. Trans women are women, sir, that sign is bulls–t,” Meskis hit back.

Sucher later gave Mekis the real truth about the whole ordeal: “You know what, nobody confronts your a-s. That’s the problem.”

“Every time some bulls–t like this happens, my sales go up because people are wanting this.”

The argument eventually spilled out onto the street with Meskis repeatedly shouting: “Trans women are women.”

Sucher fired back: “You’re nuts. You’re not a woman.”

The shop owner later told King5 that he was entitled to display the sign in his window.

“I don’t care what they do but don’t come in here and complain to me about stuff. I have free speech,” he told the outlet.

“I don’t give a (expletive) about feelings anymore. I went to Vietnam to fight for all this (expletive). Do you think I care about some (expletive) feeling? Absolutely not.”

The council member acknowledged that Sucher had the right to free expression, but she insisted on confronting the store owner.

“We are people. We are who we are and we all want to be accepted in our community,” she said.

Here is footage of the heated exchange below: